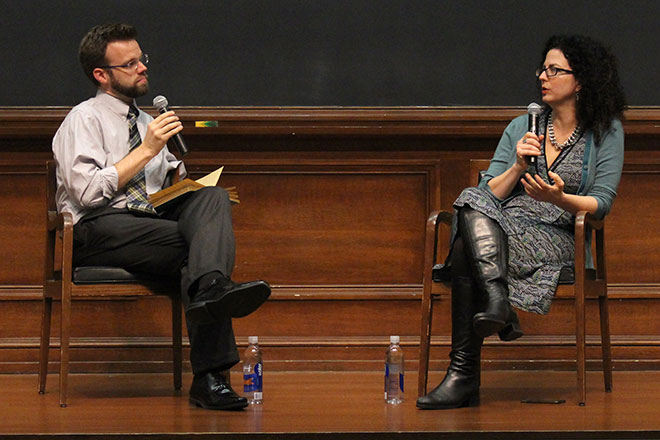 Many TV critics have a set of tools at the ready for their job: the 5-star rating, the genre label and yes, the top-10 list. Not Emily Nussbaum.

Nussbaum is The New Yorker’s television critic, and she rejects nearly all of these. It’s something she honed as an editor at New York magazine, where, after writing and editing so many, she eventually turned against top-10 lists and created the Approval Matrix, a “deliberately oversimplified guide” to the week in culture. It’s also led her to the 2016 Pulitzer for criticism, and it’s influenced what she called her “underlying argument about television”: Television is an art form in its own, and doesn’t need to be simplified by ratings or hierarchies.

NBN spoke to Emily Nussbaum before her talk. Here are the edited and condensed highlights of what she had to say.

“My advice is not to listen to the advice of people my age about journalism. Journalism has changed so radically, there’s been this incredible breakdown in the industry. I feel always a little ill at ease giving advice to young people who want to become arts critics because nothing is really replicable about stuff that I did because the way that people are paid, the way that people are hired, a lot of the career paths in are not available in the same way.”

“The one thing I will say is – aside from obvious things, like read everything – if you ever have an opportunity to get a job at a journalistic startup with money, take it. Then you end up working with a small group of people where it’s actually supported by something, that you can do every job. A lot of the jobs that I had early on amounted to small magazines where I was working with really cool people. You learn a lot from jobs like that, rather than taking a small job at an enormous place where you’re not going to get to do as much.”

The other thing is that you should respect and develop a good relationship with editors, especially great editors, starting out, because inevitably they will get promoted and get different jobs, and you will already be their writer. I was lucky and had great editors who then went from small places to big places. And when they went, they wanted me to write for them, which helped me massively.”

“Luckily, because TV has technologically changed, a lot of stuff is available whether it’s on the air now or not. I’m crazy about The Leftovers. It’s an amazing show, it’s very strange. It’s not going to be to everyone’s tastes, but I’m finding it just thrilling, really great. I loved this year, Fleabag, which is a British dark sexual comedy by this amazing woman, Phoebe Waller-Bridge. And I loved Search Party, which is this strange little show on TBS. I loved Atlanta, which is Donald Glover’s great show. And then Crazy Ex-Girlfriend, which I’m just obsessed with and recommend to everybody.”

Nussbaum proved that Thursday night at the Contemporary Thought Speaker Series’ last event of the year: her talk, moderated by Nick Davis, an associate professor in the English Department and Gender & Sexuality Studies Program who teaches a course on film criticism. But not before Davis got off to a good start with Nussbaum, gushing about her review of The Leftovers inspired the writers of the show, one of whom he knows personally.

“I’m trying to make you cry,” Davis joked. “I feel like that’s my job as an interviewer.”

Davis started off asking Nussbaum about her unorthodox start in arts criticism – how she in fact studied English and creative writing, dropped out of graduate school, and worked as a social worker for a bit before finding her way to TV criticism.

“It just seems so mean,” Nussbaum said of her initial perceptions of criticism. “It seems like a parasitical activity.” She later found, though, that it played to her “being witty sometimes” and “kind of enthusiastic quality.”

Nussbaum also used her own experiences to offer some advice to budding critics. For one, don’t just consume the type of media you want to write about. Nussbaum said her poetry background, having written poetry reviews for The New York Times, sometimes finds its way into her TV criticism – such as her review of The Normal Heart, where she draws on Thom Gunn’s “The Man with the Night Sweats.” This, she said, makes essays “feel thicker,” as opposed to just being about TV.

Nussbaum has written for two of New York City’s most prominent culture magazines, sometimes seen as polar opposites: New York and The New Yorker. While some may worry about having to live up to a “stuffy” voice and style at a magazine like The New Yorker, Nussbaum said she only made a few changes to her writing.

“Seeing my stuff in The New Yorker for the first time was a shock,” Nussbaum said, recounting how she had read the same font when she was younger. “The main thing was, I felt like I had to earn my jokes a little more.”

Some may not know Nussbaum for her work in The New Yorker, though. Perhaps, instead, it’s for her political opinions, which she tends to voice on Twitter between commentaries on shows. Nussbaum said after the election, she found it hard to justify criticism at first – going back to it being “parasitic.” But, she found inspiration to continue as a critic through the shows she was watching post-election, like The Crown and Parks & Recreation.

“I found I was so absorbed in certain shows, often which had nothing to do with what was going on,” Nussbaum said. “I always feel this weird gratefulness to the shows I was watching during that period.”

Obviously, no conversation with someone who gets paid to watch and write about TV would be complete without discussing shows themselves either. Most of that took place during an audience Q&A, when Nussbaum touched on series finales, changing her mind about shows halfway through a season or series and how reality TV is “the television of television. (Basically, it’s perceived as a low genre of something already perceived as a low medium.)

At one point during the Q&A, Lauren Herold, a doctoral student in Screen Cultures, asked Nussbaum about the male gaze and female gaze, academic topics that sometimes seep into TV writing. When Nussbaum mentioned a panel she sat on with Orange Is the New Black creator Jenji Kohan and Transparent creator-director Jill Soloway, where they argued about gazes in TV, Herold said that panel inspired her to study TV at the doctoral level.

“I often look to her when I am struggling to form an opinion about a show I’m watching,” Herold said. “I went [to the panel] and I realized it was everything I wanted to talk about for the rest of my life.”

And Nussbaum’s answer about the male gaze and female gaze?

“I bridle at these terms and find them frustrating,” Nussbaum said, bringing up shows like I Love Dick and arguing that men’s and women’s preferences can’t be simplified. “Is there like a lesbian gaze?”

The night ended with students telling Nussbaum about the shows they’re watching, like Twin Peaks and Master of None, and Nussbaum lamenting with students about the cancellation of shows like Sense8 and The Get Down. An anecdote from much earlier in the talk, however, better encapsulated the night’s big idea. Davis brought up the specific piece that got him hooked on Nussbaum: “Difficult Women,” a reminiscence on Sex and the City and its flaws a whole 15 years after the show ended, which epitomizes Nussbaum’s work. Davis said it made him want to read everything Nussbaum ever wrote. Nussbaum related it back to what she stands for.

“I don’t like some of my pieces. I love that piece,” Nussbaum said. “That piece is just a trojan horse for my underlying argument about television.”