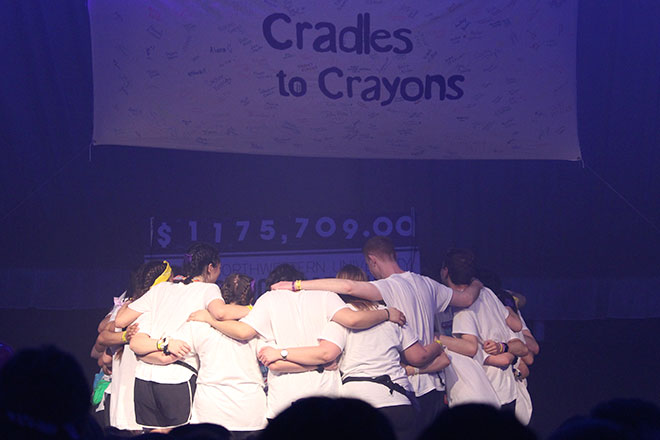 Members of the Dance Marathon executive board have a group hug after finding out their final fundraising total.

Dance Marathon poses the same question with its fundraising each year: How much is 30 hours worth? This year, the answer is $1,175,709, along with effort and emotion – marking another year that DM raised over $1 million for its beneficiaries.

That money was split between the primary beneficiary, Cradles to Crayons, and the secondary, Evanston Community Foundation. DM presented a check for $942,793.20 to Cradles to Crayons, a Chicago-based nonprofit that supplies children living in poverty with home and school necessities. ECF, which gives grants to Evanston citizens and organizations and has worked with NUDM for over 20 years, received a check for $104,754.80.

“This moment isn’t special because of the number that Finance is about to put on the board,” said executive co-chair Daniel Nussbaum, moments before the overall total reveal. “This moment is special because it is the culmination of all the grit that more than 1,000 of you have contributed to this organization and this cause.”

But he reminded the dancers that leaving the tent did not mean leaving behind the efforts of Cradles to Crayons and ECF.

“We are not here to congratulate ourselves. We are here to recognize the enormous amount of work that there is still to be done. Northwestern, I know we’re up to the task,” Nussbaum yelled.

And the crowd cheered back. And the numbers revealed that they had raised $1,175,709 to benefit Chicago children and Evanston residents. Earlier in the night, the finance chairs had also announced that dancers had volunteered at Cradles to Crayons and ECF for 517 hours.

A little before 1 a.m. on March 11, after that seven-figure reveal, the final chords of “Save the World Tonight” by Swedish House Mafia drifted over circles of DM dancers. White shirts and tired faces rose in the cloudy air, over rainbow balloons strewn across the floor. When the song ended, the dancers laughed in the silence, their arms falling from each other’s shoulders. They had just about completed their 30 hours.

“But tomorrow, when you wake up and NUDM has come to a close, what will you do?” executive co-chair Jamie Newman had asked before the reveal. “Find an issue you are passionate about and don’t be complacent.”

For Cradles to Crayons and ECF, the effects of NUDM will last for years. Bernard Cherkasov, the group’s executive director, announced just past midnight that DM’s donations would affect 60,000 children immediately and 300,000 over the next four years.

For the over 1,000 dancers who participated, the physical effects of dancing for 30 hours will wear off in a day or two. But Newman hopes the emotional effects won’t.

“The world would be a little bit of a better place if you could take a little of the happiness that exists inside the tent and just spread it into the actual world,” Newman told NBN during Block 7. “I hope that people remember that elated feeling you get when you’re in the tent jumping with a thousand people … and take that into their everyday life, that positivity and connectivity.”

Stories by these authors