"Look how uncomfortable he is!" Michael Che helps a Nobel winner celebrate his 75th birthday
By Justin Curto
2:07 a.m. May 25 2017 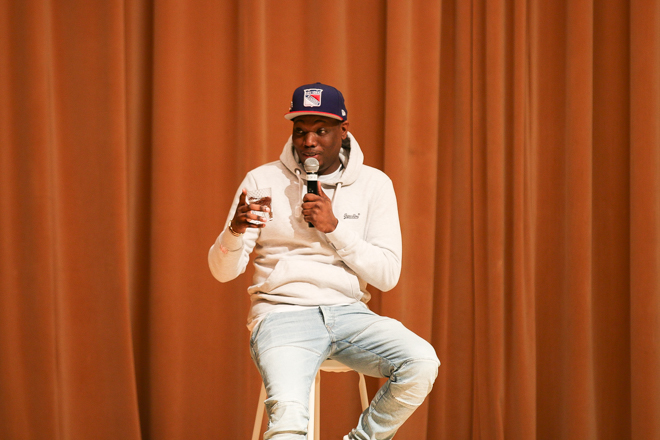 Michael Che begins his stand-up act at Tech auditorium on Wednesday night. Che performed for about an hour, and he covered topics ranging from science and politics to alcohol, sex and periods. Photo by Mia Zanzucchi / North by Northwestern

Mere minutes into his stand-up performance at Tech auditorium Wednesday night, Saturday Night Live cast member and writer Michael Che noticed someone in the audience who was significantly older than everyone else. So, of course, he proceeded to tell a story about seeing a homeless man’s penis in New York City, and then asked the man if that was OK to say at a university.

“You ever see a homeless guy with a dick so big you stop feeling sorry for him?” Che said to an audience of over 450 students and one Nobel laureate.

Yes, Sir Fraser Stoddart – the chemistry professor who won a Nobel Prize this past fall for his creation of a molecular rotaxane, or ring and axle structure, that became the basis for molecular machinery – was in Che’s audience, to celebrate his 75th birthday no less.

I could just review Che’s stand-up show (but I don’t even know if I can call it stand-up), but that’s probably not what you want to read. You want to know what else happened with Stoddart and him, right? Well lucky for you, as Che headlined A&O Productions' second spring stand-up show, co-sponsored by NSTV, he couldn’t go even a few minutes without addressing Stoddart.

Before continuing though, there’s something to clear up – he was never Sir Fraser Stoddart to Che. Che called him “Mr. Nobel Laureate” and “Doc” before finding out that Stoddart is, in fact, a Knight Bachelor.

“I am genuinely a sir,” Stoddart replied, explaining that it’s American etiquette to call someone sir, but he’s also earned the title of sir. Which led to “Sir Sir,” the name he asked Che to use (and the name this article will use for him from now on).

Che later tried to figure out what Sir Sir studied: nanotechnology, or as Sir Sir said, “nanotology,” referring to a mix-up when he was introduced to Queen Elizabeth II at his 2006 knighting ceremony.

“Yeah, I took that!” Che said. Minutes later, he added, “What does nanotology mean?” Upon finding out he meant nanotechnology, and that nano means small, Che realized, “So it’s like a little bit of technology? … Goddamn! I feel like I know less about it now.”

Che talked with Sir Sir about basically everything you’re not supposed to talk about in chemistry. Early on, for instance, he asked about Donald Trump. “Are you a Trump guy? No?”

Later, Che and Sir Sir had a conversation about alcohol. Che mentioned that his drinking habits changed between his 20s and 30s – while he drank 151-proof Bacardi in his 20s, he now drinks things like scotch

“I hope it’s not on the rocks,” Sir Sir, who was born in Scotland, said.

Even later, Che started talking about race, specifically being Black and “a little bit racist,” with Sir Sir.

“Maybe Sir Sir is racist,” Che said. “I’m not saying he is, but maybe. He’s at an age where he can be. … He remembers a time when it was all just white.”

“Did you ever think the show would end this way? I did,” Che said to Gupta. “From the moment I met you, I was like, ‘This is going to be an awkward ending.’”

That wasn’t even the most awkward exchange between the two, either. Earlier, Che mused about how he wanted to be as old and wise as Sir Sir.

“I can’t wait till I’m fucking Sir Sir,” Che said before realizing he misspoke. “That came out all wrong.”

“Let’s see how many drinks,” Sir Sir replied, referencing a story Che told earlier in the night about a gay man who paid for his drinks to see if they would eventually have sex.

Before ending his set, Che fittingly led the crowd in singing “Happy Birthday” to Sir Sir. He also left his new friend with some parting words.

“Sir Sir, you’re badass, man,” Che said. “Every time I fall out of love, you drag me right back in.”

As audience members tried to process what they had just seen, Che left the stage to roaring applause. But that likely didn’t matter as much as the handshake he got from a certain member of the audience on his way off stage: Sir Sir, the real star of the show.

Let’s talk about Julio Torres too

Michael Che, Sir Sir and Sid may have gotten the most attention of the night, but that doesn’t mean we can’t talk about opener Julio Torres as well. He called himself the “party twink” on the event’s posters, and Torres’ awkward-in-a-good-way set was full of jokes about awkward experiences.

The set’s first highlight strayed from that, though, as Torres moved upstage to a stool and began reading some of his writings from a notebook.

“If they’re not funny, remember, I didn’t promise anything,” Torres said.

He proceeded to read about being in Mike Pence’s mind, George W. Bush waking Laura Bush after a weird dream, and Melania Trump noticing her shadow while burning letters from family members.

“The reactions to these are – let me put it bluntly – insane,” Torres said of the subdued crowd.

The other highlight came at finale, when Torres did a bit he calls “Brunch with Friends” where he picks an audience member to pretend he’s having a brunch conversation with. After asking the audience member his name, though, Torres simply pulled out his phone and started texting. The audience burst into laughter.

And the best part? He was actually sending a text message, and paused after the bit to finish sending it.