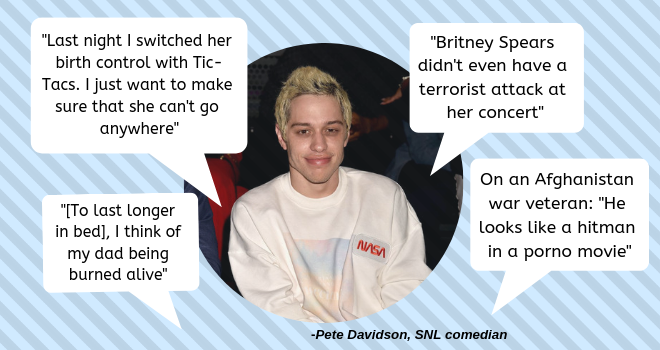 Pete Davidson is one of the youngest Saturday Night Live cast members. His comedy style, which is known for being both charming and self-deprecating, has made him a late-night fan favorite. He can be undoubtedly skilled at what he does, which is presumably why A&O booked him as its winter speaker for this coming weekend.

Davidson is also highly problematic. In the last several months, he has made controversial, inappropriate and insensitive jokes. Of course, saying something controversial constitutes an average day at work for most comedians — humor often involves crossing lines. Where Davidson differs from other comedians, however, is that he abuses his comedic liberties in ways that are irresponsible and reckless. The issues inherent in the topics he jokes about (sexual assault, military veterans, 9/11) are often exacerbated by his approach rather than mitigated.

For example: In November, Davidson said he would replace Ariana Grande’s birth control with breath mints to make sure she “can’t go anywhere” (see video below). In September, he said he “feels bad” for the pastor who made a “shitty joke” by groping Grande at Aretha Franklin’s funeral. In September, he reportedly said he was “proud” that former president Bill Clinton “ogled” Grande, also at Franklin’s funeral. Earlier this month, he poked fun at former comedian (and self-admitted sexual abuser) Louis C.K. to an audience of college students for how C.K. tried to prevent SNL from hiring Davidson for smoking too much weed.

The joke about replacing Grande’s birth control is particularly egregious: By ensuring Grande “can’t go anywhere,” Davidson is describing reproductive coercion, which is a form of sexual assault. In this theoretical scenario, not only is the decision to get pregnant no longer Grande’s, but Davidson’s joke also presumes that she would not get an abortion or otherwise choose to terminate the pregnancy if she got pregnant unintentionally.

Individually, every one of these jokes represents an instance where Davidson went a little too far and tried to get society to laugh about something that is not (and will never be) humorous. Taken together, however, these jokes represent something darker. They demonstrate a fundamentally misogynistic tendency to minimize women’s suffering, and a broad lack of respect for women in general. In this case, his humor is not helpful to society in processing tragedy. Rather, it represents how far we still have to go before people – particularly men – understand and validate the effects of sexual assault and harassment.

Davidson also went Too Far™ when he joked that “Britney Spears didn’t have a terrorist attack at her concert,” suggesting the 2017 terrorist attack at an Ariana Grande concert in Manchester that killed 22 and wounded 59 was a publicity stunt. Grande, who had repeatedly acknowledged how deeply the attack affected her, tweeted later that Davidson’s intentions with the joke were “not malicious.” At the time, Davidson and Grande were not yet dating. But, it is *wild* that Davidson even put Grande in a situation of having to, as a powerful, internationally-known female singer, defend him for making an inappropriate joke that completely undercut something that deeply affected her.

To Davidson’s credit, the jokes that cut deep can often be the most humorous. Davidson has acknowledged his tendency to gravitate toward more “awkward, weird, and dark” comedy and, after he cracked a particularly ill-conceived joke about terrorism, Grande said that the way Davidson processes traumatic events is through comedy. Furthermore, Davidson’s tendency for dark humor may stem from how he processed the death of his father, who died in 9/11 when Davidson was seven (something he routinely mentions in his comedy).

And, again, just because comedy is dark or potentially hurtful does not necessarily mean it isn’t funny. However, it’s important to not let the conversation end there. Davidson is young, yes, and he has struggled with challenges of his own, yes, but that does not give him the right to invalidate others’ suffering or contribute to the systemic marginalization of women and their achievements.

Editor's Note: The views presented in this story belong to the writer and are not necessarily reflective of North by Northwestern as a whole. This staff member will not edit future coverage of Pete Davidson's upcoming speech on campus to ensure NBN coverage of the event remains unbiased.