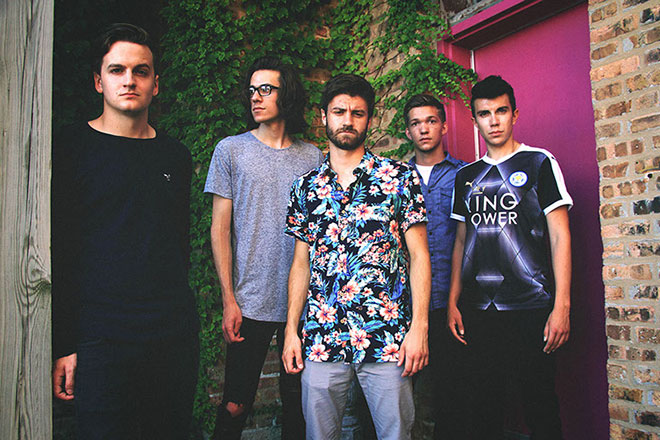 Lammers is a guitarist and vocalist for August Hotel, an alternative rock band comprising five friends from the Chicagoland area. (He’s the only NU student of the five.) The band performs at SPACE Sunday night.

Lammers is also recording and mixing music for the band's debut extended play in the studio at Louis Hall. It’s the capstone project for his Sound Cultures module, a program of study in the School of Communication.

"These are the best our guitars or drums or voices have ever sounded recorded," bassist-vocalist Cale Singleton says. "A lot of that is a testament to Ryan's insanely good mixing ability."

Lammers downplays his recording and mixing work – he responds with, "Aw shucks, Cale" – but it's clear that he takes recording seriously. In the studio with drummer Dean Sinclair on Saturday, he adjusts instruments till they sound just right, gives feedback between track takes and pieces together parts of different takes to reach the exact sound the band wants.

"When I was mixing '12AM,' [the band's single], I spent more time in the studio than I spent in my bed," Lammers says. "Literally, for about a week."

The band members say "12AM" doesn’t sound like the rest of the music they record, which is more "dancey, synthy, poppy." Walk The Moon and St. Lucia are the top-mentioned influences besides '80s synthpop – but the relationship with Walk The Moon is a bit complicated. Sinclair says he's not a fan of Walk The Moon's most recent album, TALKING IS HARD, and lead vocalist Joe Padilla says he's "never intentionally listened to Walk The Moon."

But that's part of what makes August Hotel different. The members listen to almost all kinds of music – right now, it's everything from country to hip-hop to shoegaze – so their sound can't fully be pinned down. Singleton takes the current award for most eclectic.

August Hotel's goal for performing also goes back to being "dancey, synthy, poppy." When talking about why NU students should go to the SPACE show, Lammers simply says, "So they can dance."

Not to mention, the band has multiple connections to NU itself. Aside from Lammers being a NU student and recording the band's EP on campus, August Hotel has also had Bienen students play horns on "12AM" and has played at Dance Marathon for the past two years. Lammers says the first Dance Marathon show was the biggest event the band had played in Evanston at that point.

Since that first Dance Marathon show, August Hotel has performed throughout the Midwest, even opening for bands like Knox Hamilton. However, the members agree they’re excited for the upcoming show's lineup. They've planned on doing a show with alt-rock band Ember Oceans for a while, and are fans of "surfpop" performer Beach Bunny, too.

"It's a really fun lineup," Lammers says. "It's all kind of upbeat poppy indie music. I think it's going to be a really fun show."

After the show, the band hopes to finish recording the EP and record some other material as well, while Lammers can still use the Louis studio. Once August Hotel releases the EP, the hope is to get signed by a label and go on a tour over the summer.

The No. 1 goal, though? More dancing.

"I don't know [what's ahead], we'll see," Sinclair says. "I just want to play shows and have people come out and dance. For me, that's my favorite thing."

August Hotel performs at SPACE Jan. 15. Ember Oceans and Beach Bunny will open. The show starts at 7 p.m., and tickets are $10.