Professor reconstructs and remembers history in Backstroke of the West at the MCA
By Justin Curto
7:05 p.m. Oct. 25 2017

When I walked into Backstroke of the West at the Museum of Contemporary Art, I looked up at a massive recreation of the Babylonian Ishtar Gate made from newspapers and food packaging. As I took in the scale and detail of the gate, I began to hear music — a cover of Deep Purple’s “Smoke on the Water,” recorded in Arabic with traditional Arab instruments.

These elements were from two separate works by Northwestern art theory and practice professor Michael Rakowitz, a Chicago-based multimedia artist. The gate is a piece called “May the Arrogant Not Prevail,” and the song accompanies another reconstruction project called “The invisible enemy should not exist.” But in this exhibition, I experienced them together.

And that’s purposeful. In Backstroke of the West, Rakowitz’s first museum survey, 10 of the artist’s most significant works and one commissioned work are displayed without much division between them, leaving the viewer to piece them together however they may. This idea came from Omar Kholeif, the MCA’s Manilow senior curator who planned the exhibition with Rakowitz for over two years.

“It was a very, very courageous, and in my mind brilliant, move for him to make, [to] allow for the overlap to be made clear in the exhibition,” Rakowitz said. 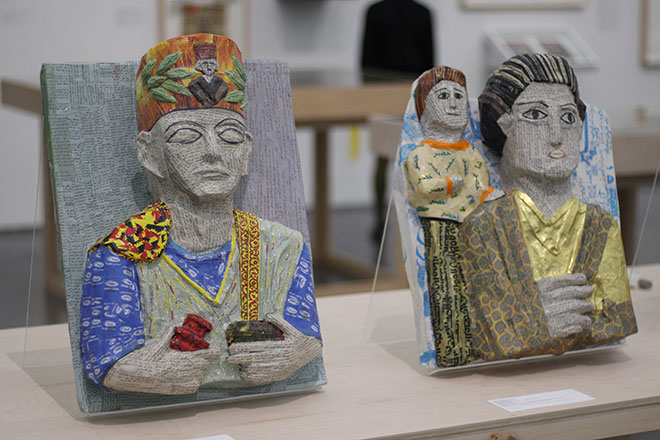 In "May the obdurate foe not be in good health," an ongoing project, Rakowitz reconstructs lost Syrian artifacts with modern materials.

Reconstruction projects like “May the Arrogant Not Prevail” and “The invisible enemy …”, food-focused projects like “Spoils” and “Return,” housing projects like “Dull Roar” and “paraSITE,” pop culture-influenced projects like “The Breakup” and “The worst condition is to pass under a sword which is not one’s own” — they’re all part of Backstroke of the West, and they all coexist in one large gallery room at the MCA. The exhibition doesn’t just work with physical boundaries though, as Kholeif writes in the accompanying book.

“I was immediately struck by the potential for art to question the socio-political boundaries of what it means to be human: what does it mean to literally digest conflict and difference?” Kholeif wrote. “Rakowitz’s work speaks to… a philosophical belief that difference can foster dialogues between humans, as opposed to flattening our heterogeneous culture into part of one globalized society.”

This manifested itself for me through two specific projects. In “The Breakup,” Rakowitz uses audio from the documentary Let It Be and Beatles memorabilia to find what exactly caused the band to break up, and puts that in conversation with the “breakup” of pan-Arabism. With “The worst condition…” Rakowitz considers the influences of Star Wars on Saddam and Uday Hussein, and how that manifested through Saddam Hussein’s reign.

As I took in both projects, situated near each other toward the back of the gallery, I began thinking about my preconceptions of Star Wars and the Beatles as quintessentially Western. Rakowitz’s work challenged that for me, showing that the Middle East interacted with pop culture as well — in different ways, no less.

“It’s that kind of fact that proves that pop culture isn’t just something that’s superficial or left on the surface,” Rakowitz said. “Uday Hussein was maybe 10 years older than me. And I started to realize that he may very well have played the same games, have had the same fantasies about power as me, have been a Star Wars fan.”

Even the title of the exhibition, Backstroke of the West, comes from Star Wars — it’s a mistranslation of Revenge of the Sith, the third episode of Star Wars, which comes from a Chinese bootlegged copy of the film. This sets the tone for the entire collection of work, focused on interpretation and the modern.

That’s also a theme with Rakowitz’s reconstruction projects. “May the Arrogant Not Prevail,” “The invisible enemy should not exist” and “May the obdurate foe not be in good health” are all translations of “Aj-ibur-shapu” — the name of a road that led through the Ishtar Gate, which was the eighth gate to the city of Babylon. While “May the Arrogant Not Prevail” took on the actual gate, ongoing projects “The invisible enemy …” and “May the obdurate foe …” are wider in scope. “The invisible enemy …” aims to rebuild objects stolen from the National Museum of Iraq in the 2003 U.S. invasion, while “May the obdurate foe …” considers lost Syrian artifacts since the country’s 2011 civil war. All three projects also use modern materials, and the ongoing ones often have to base the reconstructions off written descriptions.

“These all communicate the fact that you can’t rebuild history,” Rakowitz said. “You can’t reconstruct it. You can’t 3-D print the DNA of the people who lost their lives.”

The sheer scope of those projects struck me, along with the way they blended the historical with the modern. As I explored the gallery, I kept coming back to “The invisible enemy …” and “May the obdurate foe …” to look at more of the objects and artifacts. 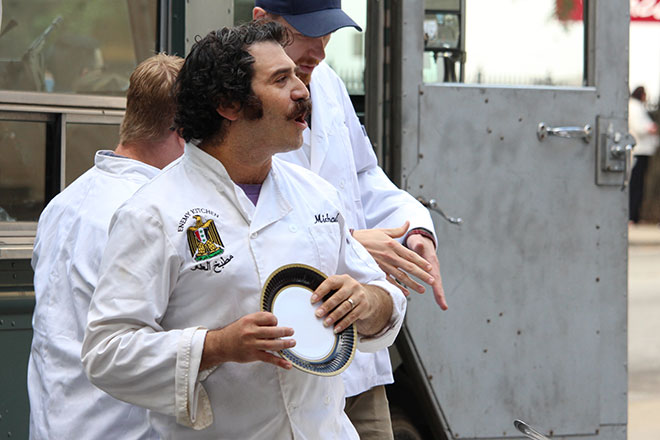 While the exhibition placed most of Rakowitz’s work together, I eventually had to leave the building to experience one of his pieces, “Enemy Kitchen.” Launched in 2003, the project manifests as a food truck where Iraqi chefs and American soldiers who fought Iraq cook Iraqi dishes together.

Rakowitz doesn’t question food as an art form — noting it’s called the “culinary arts,” after all. He said he became interested in Iraqi food because it counters the idea of hostility that’s often associated with Iraq with the hospitality that comes from sharing food. At the “Enemy Kitchen” pop-up, our meal was explicitly Iraqi as stressed by Rakowitz. Two local veterans helped with cooking, and both said their experience working with “Enemy Kitchen” after the war helped them make sense of the conflict.

“All this talk about being there for the Iraqis, and clearly that was not what we were there to do,” said Aaron Hughes, one of the veterans who prepared that meal and had previously worked with Rakowitz through “Enemy Kitchen.”

One of Rakowitz’s best-known projects also works with food: “Spoils,” a 2011 “culinary intervention” where he served venison with syrup made from Iraqi dates on plates from Saddam Hussein. He bought the looted plates from a soldier and an Iraqi refugee on eBay, and they were eventually repatriated to Iraq in December, three months after the project began. Backstroke of the West featured a video about the project, along with paper replicas of the plates for viewers to take.

“It was 2011 and there was no clarity that we were actually going to be withdrawing from Iraq in a few months … and so I wanted Iraq on that menu somehow,” said Rakowitz, who worked with New York chef Kevin Lasko on the project. “I was interested in the prominence of the place, but also the vulgarity of the way it got to your table. … I understand food as something that also performs.”

“The viewer kind of creates the webbing between the works. They’re more or less enlisted as collaborators in the production of meaning,” Rakowitz said. “I just hope that they find something of themselves, but I also hope that they’re able to come away with something that I was unable to predict that they would come away with.”

Backstroke of the West runs through March 4, 2018, at the Museum of Contemporary Art in Chicago.